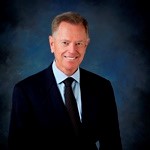 Alan Hoops has more than 30 years of experience in the healthcare and managed care industries. Mr. Hoops was a former Chairman and CEO of PacifiCare (NYSE: PHS). Mr. Hoops jointed PacifiCare in 1977 and later led the rapid expansion of the Company during the 1990s. He assumed the role of CEO in April 1993 and became PacifiCare’s Chairman of the Board in 1999.

Mr. Hoops left PacifiCare in 2000 and spent four years involved in several early stage health related companies. In 2006 in partnership with JP Morgan Equity Partners, he led the purchase of CareMore Health Plan, a Medicare Advantage Plan. He was Chairman and CEO of CareMore from 2006-2011. In 2011 CareMore was purchased by Anthem after expanding into six metropolitan markets and tripling revenues and earnings.
Hoops then became Executive Chairman of HealthEssentials a company focused on hospice and post-acute care. He served in that role from 2012-2017.
In addition to the positions above, Mr. Hoops is a board member of Corvel (Nasdaq: CRVL) and has been on the boards of six early stage companies.